Most of us know to expect morning sickness and fatigue, but here is a host of other symptoms that are less talked about. 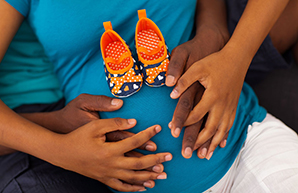 You’re not sick, so why is your nose blocked? As is the case with most pregnancy symptoms, it’s your hormones that are to blame. Higher levels of oestrogen and progesterone cause the mucous membranes in your nose to swell, and also increase mucous production. The result is a blocked nose and an increased tendency to develop nosebleeds.

This symptom is caused by the excess fluid that pregnant women retain, as well as the action of the pregnancy hormone relaxin, which causes the ligaments in your feet to relax, thereby allowing your feet to spread out and expand. You may find that you’ll have to buy a bigger shoe size in future, as sometimes this increase in foot size is permanent.

Why is the saliva building up in your mouth like a drooling baby? Once again pregnancy hormones are to blame, but it can also be worsened by morning sickness, which may cause you to swallow less frequently. Try drinking water with a slice of lemon to encourage regular swallowing and to help to dry up the saliva.

A mild, odourless discharge known as leucorrhea is totally normal during pregnancy. It is caused by increased blood flow in the vaginal area, as well as higher oestrogen levels. As long as it does not smell unpleasant and is fairly clear in colour, it is no cause for concern. It’s worth wearing a panty liner to keep your underwear fresh, though.

“Oops, I think I just leaked a little bit!” This is a common lament among pregnant women, and it’s caused by the additional pressure which the swelling uterus places on your bladder. Don’t worry – it’s temporary and things will go back to normal after the birth.

Higher levels of progesterone play havoc with your mouth and can cause bleeding gums, as well as gum disease. Bumps on your gums known as pyogenic granulomas (also referred to as pregnancy tumours) are also common in the second trimester. Don’t worry, they aren’t harmful and they’ll go away on their own.

Pregnancy requires your skin to do a fair amount of stretching, and with this stretching comes considerable itching. You’ll probably find that the itch is worse in areas like your stomach, hips, thighs and breasts. A good moisturising lotion will go a long way towards easing the itch, as will anti-itch remedies like calamine lotion. You’ll find a range of moisturising products in Clicks stores that will provide rapid relief. Tissue oil is also helpful for minimising stretch marks that are common in pregnancy.

The palms of your hands may become red (known as palmar erythema) due to increased blood flow, as well as elevated body temperature. This condition can also affect the soles of your feet. It may look rather strange, but it’s no cause for alarm.

Did you know that pregnancy could affect your eyesight too? Higher levels of fluids in your body can temporarily change the shape of the eye lens, leading to near- or far-sightedness. Fortunately things will go back to normal after the birth.

Skin tags are small growths of skin (usually about the size of a grain of rice) attached to your body by a thin “stem”. They are caused by the extra growth of cells in the outer layers of your skin and often occur in areas where the skin rubs against itself, such as under your breasts or arms. The good news is that they are totally harmless and will fall off by themselves after you have given birth.

Make use of the convenience of online shopping with Clicks and have your products delivered right to your door. Shop from the Clearblue range now! 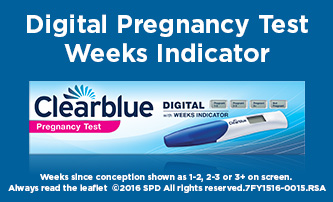 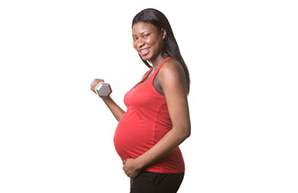 The importance of exercise during pregnancy

Exercise during pregnancy can be very beneficial. Here's how.