Tics: When to get help for your child

Repeated twitching, blinking and other tics are common, and most will pass untreated. But sometimes you need to get help. 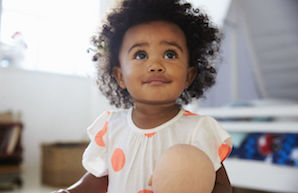 Tics are sudden movements (blinking, grimacing, shrugging), or sounds (sniffing, throat-clearing, tongue-clicking) that are “unvoluntary” rather than “involuntary”. This means your child is able to suppress them for a while, but this causes them discomfort that builds until they need to relieve it by repeating the tic.

It may be reassuring to worried parents to know that tics are surprisingly common, affecting as many as one in five school-age children (according to the American Academy of Paediatrics), mostly boys.

Yet it’s still not clear what causes tics. They used to be attributed to stress, while sleep deprivation, tiredness or excitement seem to make them worse, says Johannesburg clinical psychologist Shai Friedland.

Today a combination of factors is thought to be at play, which may include genetics (tics tend to run in families), and problems involving the brain or neurotransmitters. At one time it was thought that certain medications, including some used to treat ADHD, induced tics in children prone to them, but recent studies suggest otherwise, Friedland says.

If your child has a tic, when do you need to take action?

Most tics are not severe and will have little real impact on their quality of life. But sometimes they can be frequent or disruptive enough to affect schooling or social life and self-esteem. There are three types of tic disorder, and whether you take action can depend largely of which your child has.

This is characterised by having a tic for at least a month, but for less than a year, and is the most common type, affecting 5 to 25% of school-going children. It occurs mostly between the ages of 7 and 10, but can start as young as 2, and some children may go on to have a number of episodes.

This is a movement tic or a sound tic, but not both, that continues for a year or longer, and affects fewer than one in 100 children.

This is when there are both movement and vocal tics, typically starting when the child is between the ages of 5 and 18, and can be the most severe tic disorder, but affects just 0.3% of children. Tourette’s is a genetic neurological disorder often associated with ADHD, obsessive-compulsive disorder, and behaviour and learning problems.

How are tics treated?

Treatment of tics depends on the severity, and in cases of transient tic disorder, it may not be necessary. “But transient tics can also negatively impact daily functioning, in which case therapy can help,” says Friedland. “Transient tics can also come and go, and if the child learns techniques to deal with them, they can implement these if the tics do return.”

Treatment may also not be necessary with chronic motor or vocal tic disorder, as these tics too can dissipate, she says. “However, they do not always dissipate, and it’s therefore important to ask your healthcare professional for an assessment if it starts to affect your child’s daily life in any way.”

Today treatment of tic disorders can include behavioural therapy, which helps the child learn to manage their symptoms and lower their tic frequency. Medication may also be prescribed to lower the frequency, and to reduce stress and anxiety that could worsen the condition.

How to cope with your child's tic

If your child has a tic, it often doesn’t help to ask them to suppress it. “Especially if they also have ADHD or anxiety, pressuring them to stop can add to the problem, as your child most likely wants to stop the tic but often they can’t,” says Friedland. “By asking them to stop, you may be adding to their levels of anxiety – and it may also make them feel guilty for not being able to stop, and they may feel like they are frustrating their loved ones. This added anxiety and guilt can make the tic worse.”

Don’t draw attention to it – try to ignore it and encourage others to as well, and keep giving your child the loving support they need. If the tic is pronounced, speak to caregivers and teachers about it, and ensure there is no bullying.