Should we avoid eating chicken?

A new study has challenged the belief that chicken is a healthier alternative to red meat. Should it put us off this popular protein? 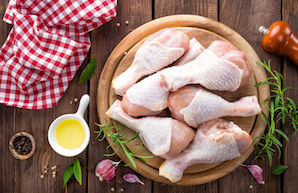 Chicken is South Africa’s most consumed animal protein, and the most affordable meat – to the extent of creating a lobby to have it exempt from VAT, notes Business Insider SA. The poultry industry is also the biggest segment of the agriculture sector, contributing 16% to the gross national product and employing nearly 108 000 people, directly or indirectly through related industries. And we’re consuming more chicken per head by the year, according to the Department of Agriculture, Forestry and Fisheries.

Apart from chicken’s versatility and affordability, the industry has had much to crow about in its endorsement in dietary guidelines as a healthier alternative to red meat. Yet in June a study appeared in the American Journal of Clinical Nutrition suggesting that white meat is just as bad for our cholesterol levels as red meat. It concluded that restricting meat altogether, red or white, was advisable for lowering blood cholesterol, and that plant proteins (from the likes of legumes) were the healthiest for blood cholesterol.

The study reportedly surprised the scientists leading it at the Children’s Hospital Oakland Research Institute in the US. “We expected red meat to have a more adverse effect on blood cholesterol levels than white meat, but this was not the case – their effects on cholesterol are identical when saturated fat levels are equivalent,” said senior study author Ronald Krauss.

So should we stop favouring chicken?

We should probably not let our feathers to be ruffled, for several reasons.

The study was small

Involving just 113 men and women, divided into three groups (one restricted to red meat protein, the second to white poultry and the third to plant protein).

It's important to remember Krauss’s phrase above: “their effects on cholesterol are identical when saturated fat levels are equivalent” – because chicken is lower in saturated fat than red meat, says the American Heart Association. “In general, red meats have more saturated (bad) fat than chicken, fish and vegetable proteins such as beans. Saturated and trans fats can raise your blood cholesterol and make heart disease worse,” it notes.

Chicken still has a place in a balanced diet

Chicken – like red meat and plant protein – has a number of important nutrients for health, suggesting it should be part of a balanced diet. For example, a 90-120g boneless, skinless chicken breast provides 21-28g of readily absorbed protein – a major building block of muscle tissue, including heart tissue, and responsible for the maintenance of cells and bone, and essential tasks such as the breakdown of toxins, says Bianca Tromp, dietitian at the Heart and Stroke Foundation SA (HSFSA). In addition, 120g of chicken packs around 24 micrograms of selenium (about 30% of your daily requirement), a trace element believed to limit the formation of free radicals and so prevent oxidative harm to cells and tissues, which could reduce the risk of cancer, she says, while the National Institutes of Health in the US note that selenium deficiency can lead to cardiovascular and neurological diseases. About 120g of chicken also provides around 25% of our daily requirement of vitamin B6 (pyridoxine), which helps in the production of white and red blood cells, neurotransmitters and more than 100 enzyme reactions.

A lesson in cholesterol

A systematic review and meta-analysis in the American Journal of Nutrition, of 40 studies published between 1979 and 2013, found that “dietary cholesterol was not statistically significantly associated with any coronary artery disease, ischemic stroke or haemorrhagic stroke”. This is in line with studies by institutions such as the Harvard School of Public Health, that have found that dietary cholesterol in animal foods (red meat, chicken, fish, eggs and dairy) has little effect on most people’s blood cholesterol because our liver, which makes our cholesterol, changes the quantity it produces depending on how much we consume, making less when our body absorbs more from our diet.

How to build a balanced diet around varied protein sources

Experts agree chicken can play a useful part in a balanced healthy diet, especially in tight economic times. Enjoy it, but remember that a serving should be no bigger than the palm of your hand, notes the HSFSA (about 90-120g). And rather grill, bake, roast or boil chicken, don’t fry it.

“Legumes, lentils, beans, nuts, seeds and soy are also great sources of protein which contain no saturated fat or cholesterol,” says Tromp. Start including them in stews, soups and salads (a serving is a fist full). “But although plant proteins are a healthy alternative, they don‘t contain all essential amino acids the way animal sources like chicken do. If you were considering a vegetarian lifestyle, you’d have to include various sources to obtain all amino acids. This might be a bit tricky, so ask a dietitian for help in this regard.”

Aim for a varied, sustainable diet, and keep a sensible eye on portion control.