Siya and Rachel Kolisi on their Covid experience and staying healthy

One of SA's most-loved rugby couples talk to us about family, their relationship, and surviving and thriving during these challenging times. 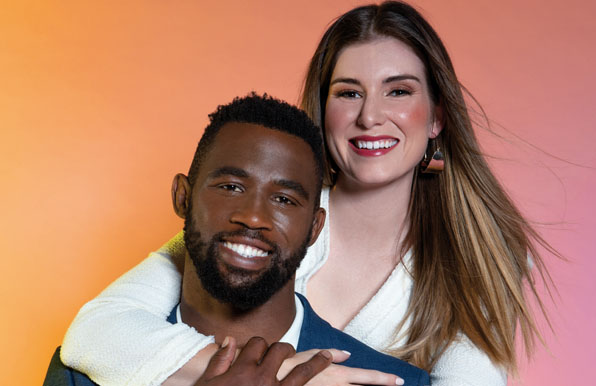 When South Africa won the Rugby World Cup in November 2019 no one could’ve imagined that we were only months away from plunging into a worldwide shift that would leave us reeling over a year later. Like many of us, Siya and Rachel Kolisi had a year packed with exciting plans following the Big Win and were shocked to find their world turned upside down.

This celebrity couple makes you feel immediately at ease. They both exude a quiet confidence and are open and relaxed. Sitting next to each other on the couch, the love and respect they have for each other is palpable. They have not had an easy year, yet in so many other ways they’ve had a very successful year.

For Siya it was hard being separated from his teammates. “I really missed the banter and being part of a team. It was really tough to put rugby on hold and adapt to being indoors. We didn’t know when we could start training or when we’d play again.” But for the Kolisi’s this downtime was also an opportunity to reflect on what was important to them.

“I had huge plans for 2020 but like Siya, all my plans were put on hold,” says Rachel. “But in the greater scheme of things this wasn’t important. There were so many people going through so much trauma – frontline doctors and nurses, people losing loved ones. There’s something powerful about experiencing something that everyone in the whole world is going through – it shows that you’re not alone in your struggle. I think the pandemic reminded us of that.”

Stuck at home, Siya and Rachel turned their attention and energy to the Kolisi Foundation which they’d been talking about for some time. “Initially we called our sponsors and partners to help provide PPE to frontline workers, but then our focus shifted to feeding the hungry.”

The couple literally travelled South Africa covering 16 000kms following food trucks to help deliver food to the hungry. “We wanted to make sure that proceeds were getting into the right hands,” says Siya, who knows how it feels to go hungry. “Years ago I would’ve been the person receiving the food. I remember going around with my granny and asking people in the township for a cup of mielie meal.” People were surprised to see the celebrity couple helping to dish out the food. “People cried – they didn’t understand why we would be there. It made me realise the need to be more accessible as celebrities,” says Siya.

Rachel was equally moved by the experience. “I grew up in the small town of Grahamstown. I remember seeing poor kids on the street – I didn’t understand why. On this road trip it was tragic to see so many desperate people in need and to know that we couldn’t help everyone.”

Their shared passion to help others has played a role in building and strengthening their relationship. Siya says, “It’s what makes me proud of Rachel – she’s shown me that without people we are nothing.” Rachel feels the same about Siya. “Part of the reason I fell in love with him was his caring and kindness for others. It’s a rare thing to find in a selfish world. We are both Christians and believe everyone’s got a gift and a plan and purpose for their life. You find your passion in what breaks your heart.” Siya nods in agreement, “Our success is not ours, it’s just borrowed for a short period of time and we’ll use it to help others.”

Not just a WAG

While Siya has the celebrity status as captain of the Springboks, Rachel has managed to carve outher own share of the limelight. “As a woman I refuse to be boxed,” she says. “Not as a mother, nor as a wife of a celebrity. I hate the term WAG (wife or girlfriend of a famous sportsman). For all the generations of women coming after me, I want to show that there’s a different way. You can create your own name and brand.” Apart from being mother and wife, Rachel is often commended for her sense of humour and showing her human side. In person she is quietly respectful, even slightly shy, and her strength is having an inner confidence of knowing who she is.

Rachel says, “In 2020 I learnt that as women we’re so busy making sure everyone else is fine and we wake up one morning and realise that we’re not. It is our responsibility to prioritise ourselves. Society says if women prioritise anything else other than what’s expected of you, you’re selfish. I want to change this perception.” Siya is enormously supportive of Rachel sharing the limelight and having her own brand, though it took some adjusting on his side. “I grew up in a home where men go out get the money and women stay home and cook and clean. I’ve had to realise my wife and I are equals. At the beginning I thought Rachel would take the kids and I’d come home from training and put my feet up in front of the TV but I had to remember that I’m still a father and husband and my kids and partner need my attention when I’m home.”

Siya recognised that Rachel had always supported him so it was important to do the same for her. “We had a rocky patch, and fought a lot but it’s been so worth it now that we’re out the other side. We’re not competitive, it’s more about supporting one another.” This equality in their relationship extends to a shared passion against gender-based violence. For Siya this is a very personal issue. “I’ve seen it from a young age happening to people who’ve meant the world to me. I never wanted to engage with it because it made me uncomfortable. But Rachel says how are we going to change if you don’t talk about it?”

Siya believes change needs to come from men. “You first need to educate yourself as your son will see what you’re doing and follow that. Change yourself first so your daughter doesn’t have to worry about what she wants to wear.” The Kolisis believe that more needs to be done to create vulnerable safe spaces for men, who they believe carry a lot of baggage from the way men are raised. “Men need to fight to get more healing spaces – we’re hurt but we’ve been taught to be tough and we put that out into the world. You need to heal what’s inside your heart,” says Siya.

While the past year was spent helping others and enjoying lots of family time, they’ve not been unaffected by the virus itself. Rachel and her daughters all got infected at the end of 2020 though Siya and the boys escaped it. “It was terrible. I had to be so aware of my anxiety,” Rachel recalls. “I’d lie awake wondering if I should wake Siya up to take me to hospital.” It was also frightening for Siya. “It was tough seeing my wife sick and not being able to do much for her. She’s usually the one looking after us all so it was time for me to do that for her.”

In true Kolisi style they say they still felt so much more fortunate than others to be able to get immune-boosting vitamins and a humidifier which all helped ease Rachel’s symptoms. “I always get my vitamins and prescriptions from Clicks,” says Siya. “When I go and pay in my mask I can see the cashiers asking each other if it’s Siya Kolisi,” he chuckles. “The Clicks staff is always amazing and helpful.”

Rachel is also a fan of Clicks and says she buys Aunt Jackie’s products for her children’s hair. “We also get our flu shots there at the Clicks clinic every year.” Now that Rachel is fully recovered, except for her sense of smell, health continues to be the couple’s priority – daily exercise, healthy eating, but most importantly recognising the importance of family time, to keep working to build a happy marriage and always helping those in need.