Study: Cancer in women is rising 6 times faster than in men

A study says that women are at an increased risk of cancer, chiefly due to being overweight. 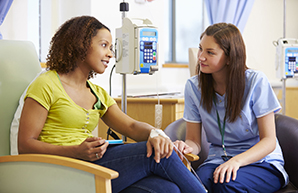 The bad news is that cancer rates are set to rise in the next 20 years – and this worrying increase will be six times faster in women than in men, according to Cancer Research UK. "These new figures reveal the huge challenge we continue to face, both in the UK and worldwide," Sir Harpal Kumar, Cancer Research UK's chief executive, told Sky News upon the study's release. However, the good news is that there is much we can do about it, as studies show unhealthy lifestyles are mainly responsible – not our genes.

The recently-released research suggests that cancer cases will rise by around 0.5% for men and 3% for women by 2035. “It is concerning that rates are predicted to rise so sharply in women, especially as so many cancer cases could be prevented,” Sarah Toule from the World Cancer Research Fund (WCRF) told Sky News.

“Our evidence shows that around a third of the most common cancer cases could be prevented if people were a healthy weight, had a healthier diet and were more active. For breast cancer, this would mean preventing around two in five cases.”

What are the cancer statistics in South Africa?

The Cancer Association of South Africa (CANSA) reports that the most commonly diagnosed cancers worldwide are lung (13% of the total), breast (11.9%) and colorectal (9.7%).

“In South Africa, the most common cancer among women is breast (1 in 29), followed by cervical (1 in 43). For men, prostate cancer is the most common (1 in 19), then lung cancer, colorectal, oesophageal and bladder,” says Professor Michael Herbst, head of health at CANSA.

How being overweight increases your risk of many cancers

The WCRF reports that being overweight or obese increases your risk of at least 11 cancers: oesophageal, stomach, kidney, gallbladder, liver, prostate, ovarian, endometrial, pancreatic, colorectal and breast. And according to Cancer Research UK, obesity is one of the biggest factors that can raise the risk of cancers that affect only women, such as ovarian and womb.

It seems obesity is linked to low-grade chronic inflammation and affects levels of hormones and growth factors, including insulin. Obese people have higher levels of insulin and leptin, which can promote cancer cell growth. Abdominal fatness, especially, raises insulin resistance. It causes the pancreas to compensate by producing more insulin, and high levels of this increase the risk of cancers of the colon, endometrium, kidney and possibly pancreas.

For men, obesity is also linked to lower serum testosterone levels, which can raise the risk of prostate cancer.

What are South Africa’s obesity statistics?

South Africa has the highest overweight and obesity rate in sub-Saharan Africa, with up to 70% of women and a third of men being classified as overweight or obese, reports the Heart and Stroke Foundation South Africa. A sobering 40% of local women are obese, which means they have a body mass index greater than 30 kg/m2. However, this is no longer just an adult problem, 1 in 4 girls and 1 in 5 boys between the ages of 2 to 14 years are overweight or obese.

“There are many reasons as to why we are facing this obesity epidemic,” says Dr Vash Mungal-Singh, CEO of the Heart and Stroke Foundation SA. “It is difficult to pinpoint one culprit but people need to understand that our lifestyles are largely to blame. South Africans eat too much, drink too much alcohol, and don’t move enough.”

How to lower your risk of cancer

Cancer is widely thought to be a mainly genetic condition, but in most cases, says the WCRF, genetic susceptibility leads to cancer only when driven by external factors – and body fatness is the big one.

To help avoid becoming one of the rising cancer stats, make sure you follow these guidelines:

1. Watch your weight: Eat a balanced diet of healthy, unprocessed foods and get regular moderate exercise. If you’re overweight or obese, you need to lose weight slowly but surely – consult with your doctor and a dietician about the best way to tackle your weight-loss journey.

2. Do a monthly breast self-exam and go for regular clinical breast exams. From age 40, go for a mammogram each year (CANSA has a list of public hospital breast clinics).

3. Go for a Pap smear at least every three years from age 25, to detect abnormal cervical cells early. (If you use public sector screening services, you are entitled to three free Pap smears, starting at age 30 or older, at 10-year intervals). Consider an HPV vaccination against this sexually-transmitted virus, a high risk for cervical cancer.

4. Men need to go for a routine prostate specific antigen (PSA) blood test yearly from age 40 if they have a relative who had prostate cancer before age 65; else go from age 50. (Finger-prick tests are available at most CANSA Care Centres, or your Clicks Clinic.)

5. “Avoid being in the sun during the hottest times of day, avoid alcohol and don’t use any tobacco products, to further lower your cancer risk,” Professor Herbst adds.

Struggling to get your weight under control? Clicks Clinics offers a range of health screenings to help you out: