What is type 2 diabetes?

Type 2 typically occurs in adulthood and is known as a ‘lifestyle disease’ because it is often triggered by being inactive, following a poor diet and carrying excess weight.

Type 2 diabetes is typically defined by raised blood glucose levels (called hyperglycaemia) which, over time, can do major damage to the body’s vital organs, blood vessels and nerves. About 85 to 90 percent of the world’s diabetics have type 2 diabetes, yet many people who have this condition go undiagnosed. Blood insulin levels are normal or increased, compared to Type I diabetes in which there are low insulin levels.

Type 2 diabetes is often preceded by a condition known as ‘prediabetes’, which as it suggests, means that the sufferer may not have all of the symptoms of diabetes but does present abnormally high blood sugar levels.

If you are over 35 and are at risk of type 2 diabetes (see risk factors below), you should be tested every year. A finger-prick test at a Clicks Pharmacy can quickly indicate the likelihood that you may have diabetes.

If this test indicates raised glucose levels in the blood, the nurse who has administered the test will advise you to contact your doctor for more extensive blood tests.

Look out for the following risk factors:

Pre-diabetes is the state in which you may show some but not all of the risk factors for type 2 diabetes. Known medically as intermediate hyperglycemia, this is a condition that experts believe will affect as many as 470 million by 2030.

Are you at risk of pre-diabetes?

Evidence shows that those most at risk of pre-diabetes tend to be over 45 years old and are often overweight.

Lifestyle habits that may indicate that you are at risk include low activity levels, a diet high in processed foods and sugary drinks, and high stress.

Other risk factors include:

If you have pre-diabetes, timely changes to your lifestyle and eating habits can reverse these symptoms.“For pre-diabetic individuals, lifestyle modification is the cornerstone of diabetes prevention, with evidence of a 40 to 70% relative-risk reduction,” advises a 2012 report published in The Lancet. Doctors may also prescribe drugs to assist pre-diabetic patients with lowering their blood sugar levels.

Read more about preventing the onset of type 2 diabetes here. 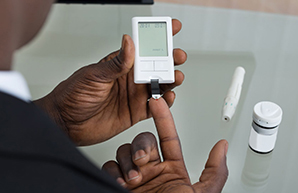 We answer crucial questions related to living with diabetes.