Appendicitis is a serious medical condition in which the appendix becomes swollen and inflamed, and can burst if not caught in time.

An appendix is a finger-like pouch connected to the large intestine.

It's not always clear what causes appendicitis, but it may be due to a viral, bacterial or fungal infection that has spread to the appendix. Another cause may an obstruction of the area inside of the appendix, called the appendiceal lumen or appendix lumen.

If you're experiencing abdominal pain that's gradually getting worse, contact your doctor immediately or get to a hospital.

If appendicitis is not treated, the appendix can burst, cause potentially life-threatening infections and even death.

There is no way to predict who will get appendicitis, so spotting the condition’s early symptoms is vital for early diagnosis.

Appendicitis usually starts with a pain in the middle of your stomach that comes and goes. In a short time, the pain spreads to the lower right-hand side, and becomes constant and severe.

In pregnancy, women may also experience other symptoms not often seen in adults with appendicitis, including uterine contractions, urination that's painful, and pain in the upper right stomach, possibly as a result of the appendix changing its position during pregnancy.

If you have pain that suddenly worsens and spreads, your appendix may have burst. This is a medical emergency. Get to a hospital immediately.

An appendicitis diagnosis is not straightforward, as there is no single diagnostic test. Typical symptoms are reportedly only present in about half of all cases. Also, some people's appendix may be located in a slightly different part of their body.

During the assessment, your doctor will ask about your symptoms, examine your abdomen and see if the pain gets worse when pressure is applied to the appendix area (your lower right-hand side).

If your symptoms are typical of appendicitis, your doctor will most likely refer you to hospital immediately.

The appendix will typically need to be surgically removed as soon as possible.

Known as an appendectomy or appendicectomy, it is a common operation with a high success rate. A laparoscopy or keyhole surgery is usually performed. This involves making small cuts in your abdomen, through which surgical instruments are inserted.

“Open” surgery, where a single larger cut is made in the abdomen, is usually carried out if the appendix has burst or access is difficult.

Most people make a full recovery from an appendectomy in a couple of weeks, although strenuous activities may need to be avoided for up to six weeks after open surgery.

There are certain antibiotics used for appendicitis treatment, particularly cefotetan (Cefotan) and cefotaxime (Claforan and Mefotoxin), which help prevent wound infections after surgery.

As the causes are not fully understood, there's no guaranteed way of preventing appendicitis.

However, your risk may be lower if you eat foods high in fibre, such as fresh fruits and vegetables. 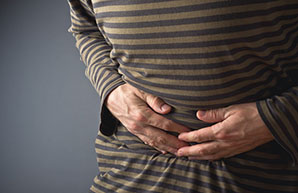 4 symptoms that may mean you have appendicitis

Ensure you know what to look out for, so you're not faced with the fallout of a burst appendix.