Problems with your digestive health?

We offer advice for dealing with a few of the most common stomach problems. 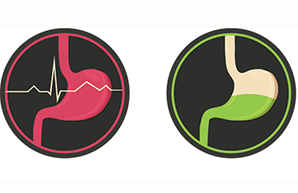 If the thought of discussing your digestive issues in public sends you running back to the bathroom, it’s time to get help. Here's what could be causing your discomfort.

Irritable Bowel Syndrome (IBS) is not a disease, rather a collection of symptoms, including abdominal pain, bloating and either constipation or diarrhoea (or alternation between both). IBS doesn’t damage your intestines, so doesn’t pose a health risk, but it can cause a lot of physical and social discomfort. The cause of IBS is uncertain, but it is thought to be the result of heightened sensitivity in the colon to certain trigger foods. It is also partially hormonally driven, as it is typically worst just before the onset of menstruation.

Helpful tips:
• Avoid common IBS trigger foods, such as chocolate, dairy, caffeine and alcohol (also try to identify which other foods trigger your symptoms).
• Avoid eating very large meals, which put a lot of strain on the digestive system.
• Fibre supplements can help to treat constipation. Also try Clicks Herbal Tea with Senna Leaf or Clicks Senna Tablets.
• A multi-strain probiotic such as Clicks 9-Strain Probiotic or GastroChoice can ease bloating and flatulence.

Inflammatory Bowel Disease (IBD) is an umbrella term used to describe chronic inflammation of the digestive tract. The most common forms of IBD are Crohn’s disease and ulcerative colitis. Crohn’s disease can cause swelling at any point of the digestive tract, while ulcerative colitis results in the formation of small ulcers on the surface of the colon or rectum. Symptoms of IBD include abdominal pain, diarrhoea and bloody stools. If you suspect that you may have IBD, consult your doctor as soon as possible. Left untreated, it can cause blockages in the intestines or infection.

Helpful tips:
• Avoid common IBD trigger foods, such as fatty foods, raw fruit and vegetables, gas-producing foods such as beans, onions and cabbage, caffeine and alcohol (also try to identify which other foods trigger your symptoms).
• High stress levels often make IBD worse. Try to manage your stress through exercise or counselling. A vitamin supplement such as Clicks Stress-B complex can also help to relieve stress.
• Probiotics can help to ease bloating and discomfort.

Gastro-oesophageal reflux occurs due to the loosening of the valve (known as the lower oesophageal sphincter) that separates the oesophagus from the stomach. When this happens, food and stomach acid passes back into the oesophagus, resulting in heartburn (a burning feeling in the chest and throat). Reflux may, however, also manifest as a dry cough or the feeling of having trouble swallowing. If you experience these symptoms more than twice a week you may have gastro-oesophageal reflux disease (GERD).

Helpful tips:
• If you smoke, then stop. Smoking makes reflux far worse and can also damage the lining of the oesophagus. Try Nicorette Gums (Vitality members earn 25% cash back on this) to help you deal with the cravings.
• Avoid foods which make reflux worse, such as citrus fruits, chocolate, caffeine and greasy or fried foods.
• Avoid lying down directly after a meal, and consider elevating the head of your bed slightly.
• Maintain a healthy weight. Being overweight puts extra strain on the stomach.
• An antacid such as Gaviscon or Gelacid will provide temporary relief until your next meal. Both of these products are available at Clicks.

Chat to a Clicks pharmacist if you are experiencing digestive problems. If problems persist, consult with your GP for a medical examination. 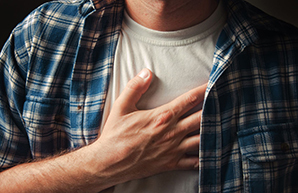 5 ways to fight indigestion and heartburn

Rich food and overindulgence can all lead to indigestion. Here's how to ease the burn.