Flu, or influenza, is a contagious respiratory viral infection that attacks the ears, nose, throat and lungs. 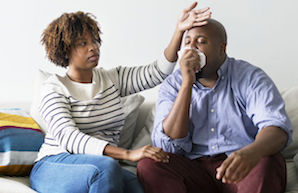 According to the World Health Organisation, flu occurs globally with an annual attack rate estimated at 5 percent to 10 percent in adults and 20 percent to 30 percent in children. Illnesses can result in hospitalisation and death mainly among high-risk groups (the very young, elderly or chronically ill).

Worldwide, these annual epidemics are estimated to result in about three to five million cases of severe illness, and about 250 000 to 500 000 deaths.

Flu symptoms can be mild to severe, and it affects all age groups, although children younger than five and adults over 65 are most vulnerable. Other risk groups include:

Flu usually develops suddenly, spreads easily through coughs and sneezes and lingers much longer than a cold. When an infected person coughs, infected droplets get into the air and another person can breathe them in and be exposed. These droplets can land in the mouths or noses of people who are nearby or possibly be inhaled into the lungs.

Hands contaminated with flu viruses can also spread the virus.

There are three types of flu viruses: A, B, and C. Type A and B cause the annual flu epidemics that have up to 20 percent of the population sniffling, aching, coughing, and running high fevers. Type C also causes flu; however, type C flu symptoms are much less severe.

Type A flu virus is constantly changing and is generally responsible for the large flu epidemics.

Often called “flu season”, the flu virus is typically in circulation in the winter months in South Africa.