Why you should talk about miscarriage

Miscarriage is a common and painful loss, but many women struggle to talk about it. 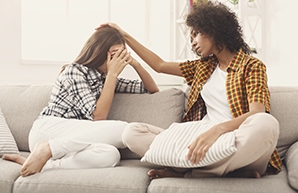 About a quarter of all pregnancies end in miscarriage, yet two-thirds of women who have experienced this loss may be unable to discuss it even with their best friend, according to a poll by Tommy’s, a miscarriage research organisation based in the UK.

The silence around the subject means many women who have lost babies carry unexpressed feelings of failure, isolation and guilt, the researchers report. A full 70% said they felt guilty about the miscarriage, 79% felt like a failure, 85% didn’t think people understood what they had gone through and 67% felt they couldn’t talk to their best friend. Some 35% didn’t even feel they could talk to the father about the experience.

These findings have led to a #misCOURAGE campaign to encourage women to speak up and share their experiences, but silence persists. “In my experience, many women and family members are traumatised by the miscarriage, and instead of seeking help to process it, they suppress the loss and never deal with it,” says Illeana Cocotos, a Johannesburg-based psychologist and bereavement counsellor.

“Many also choose to minimise their loss, which likewise prevents them speaking up and seeking help. Losing a baby is a big deal no matter how early in the pregnancy. I’ve also found that in many cultures news of the pregnancy is shared only after three months into the pregnancy. As many miscarriages occur in the first trimester, the woman again does not speak out and is left to deal with it on their own.”

The stigma around miscarriage is believed to have roots in traditional beliefs that it’s a woman’s duty to produce an heir, and failure to do so means they are to blame. Yet miscarriage is almost always the result of factors outside her control.

Three quarters of miscarriages occur in the first trimester, often before a women even realises she is pregnant. And three quarters of these occur because the embryo was defective in some way, says Dr Antonio Rodrigues, a gynaecologist and obstetrician at Medfem Fertility Clinic in Johannesburg.

When a miscarriage occurs in the second trimester, it tends to be because of problems with the uterus (such as fibroids) or the placenta, but these too are no one’s “fault”. Miscarriage is much less common in the third trimester (when it’s called a stillbirth), and causes can range from umbilical cord problems to an infection in the uterus.

A miscarriage at any stage can be painful to cope with, says Cocotos. “If others don’t acknowledge your loss, you can feel invalidated, and women who grieve alone are more prone to depression. There can also be anxiety around getting pregnant again.”

It’s important to share your loss with your support system, she says. “This will allow you to grieve in a healthy manner and allow family and friends to be there for you. If they shy away from talking about your loss or seem awkward, don’t personalise this. Often people who are uncomfortable with death will find it difficult to speak about your miscarriage. Some may even say things which seem insensitive – remember that they feel the need to say something to make you feel better. The reality is that nothing they say will make it better and it’s difficult to find the right thing to say, so don’t take anyone’s comment to be critical of you.”

If you have no one to turn to, ask your health professional to refer you to a support group that meets in real time (see http://www.birthsupport.co.za/loss.php, www.tcfcape.co.za/stillbirth.htm), or online (see Facebook: Miscarriage and Infant Loss Support Group, Miscarriage Support, or I Have A Baby In Heaven).

Also talk it through with your health professional or a clinical psychologist, who can help you understand that you are not to blame. “In my experiences, one of the hardest things for a woman to accept is that the miscarriage was out of her control,” says Cocotos. “However, once she is able to process this and accept it, this realisation can help change her perspective on life.”

If you have two or more miscarriages in the first trimester, or one or more in the second trimester, your gynaecologist will usually run a full investigation for specific problems (chromosomal, hormonal, anatomical, autoimmune or infections), says Rodrigues.

Make a special effort to talk over the loss with your partner. “A father’s grief is often dismissed by others, but men feel similar emotions, though they may deal with them differently,” says Cocotos. “They tend to talk about them less. They may feel they need to be strong to care for you, it’s not that they don’t care.”
Stay connected as a couple, even if it’s cuddling rather than talking. If you struggle, get professional grief or couples counseling. And keep reminding yourselves that most couples who have a miscarriage go on to have a healthy baby. 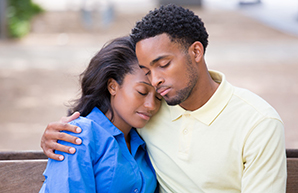 How to cope with the emotional fallout of a miscarriage

Miscarriage is common, but the emotional pain can be devastating. Here's how to start healing.