Guaifenesin is an expectorant drug used to treat mucous congestion in the respiratory tract such as the throat and lungs.

Guaifenesin is a mucous decongestant used in cough syrup to treat a phlegmy cough (usually due to an upper respiratory tract infection) by loosening mucous from the throat and lungs.

The drug is extracted from the guaiac tree, a plant used by Native Americans for its medicinal properties.

Guaifenesin works by drawing water into the bronchi (the passageways that allow air into the lungs), which thins the mucous trapped there and loosens it, allowing it to be coughed up more easily.

The typical dose for adults is 200 to 400mg every four hours.

Children younger than two-years-old should not take guaifenesin.

Always check the correct dosages with your Clicks pharmacist first.

Guaifenesin should be avoided if you suffer from porphyria (a group of rare genetic disorders that affect mainly the skin or nervous system).

Guaifenesin should be used with caution if you suffer from the following conditions:

No systemic drug interactions have been noted for guaifenesin, but always inform your doctor or Clicks pharmacist what prescription and non-prescription medications, vitamins, nutritional supplements and herbal products you are taking or plan to take.

What are guaifenesin’s side effects?

Side effects may include:

Discontinue use if hives (urticaria) or other allergic symptoms develop.

Call a doctor or an ambulance immediately if you notice the following symptoms, which may be due to either an overdose or an allergic reaction: 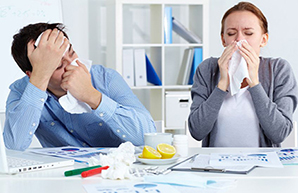 You may feel noble soldiering on, but working while you're sick can be harmful to you and to others.