Can refined carbohydrates raise your risk for depression?

A recent study says carbs may increase the risk of depression. We investigate. 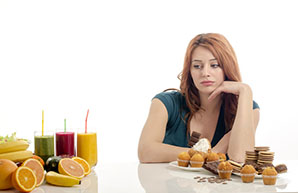 Researchers in the US have found that a diet high in refined carbohydrates could be a risk factor for the development of depression in postmenopausal women. A recent study published in The American Journal of Clinical Nutrition examined the dietary glycaemic index (GI), glycaemic load, types of carbohydrates consumed and depression in more than 70 000 postmenopausal women who participated in the National Institute of Health’s Women’s Health Initiative Observational Study between 1994 and 1998.

The researchers found that higher GI values and the consumption of added sugars and refined carbohydrates were associated with an increased risk of new cases of depression in post-menopausal women. The study also found that greater consumption of dietary fibre, whole grains, vegetables and fruit (in whole form, not juice) was associated with a decreased risk of depression. This, according to the researchers, suggests that dietary interventions could serve as treatments and preventive measures for depression.

What happens when you eat refined carbs

Can what we eat really influence our mental wellbeing? To answer this question, we need to examine what happens when we eat refined carbohydrates. The more highly refined the carbohydrate, the higher its score on the glycaemic index (GI) scale. The GI scale, which ranges from 0-100, measures the amount of sugar in the blood after we have eaten. Refined foods tend to have a very high GI.

The consumption of high-GI foods causes a rapid release of glucose into the bloodstream, explains clinical dietitian Anél Viljoen. “This triggers the secretion of considerable amounts of insulin to lower blood glucose levels – even to the point where the supply of glucose to the brain may be compromised," she explains. "The mere lack of glucose to the brain can lead to changes in mood and behaviour, fatigue and cognitive impairment. In order to correct this, a surge of stress hormones (such as adrenaline and cortisol) is released from the adrenal glands. These hormones cause blood glucose to rise, but can also lead to other depressive-like symptoms such as irritability, anxiety, sleeping problems and impaired memory and concentration."

Which comes first: mood or food?

On a physiological level this argument certainly holds, says Viljoen. “In prehistoric times when food was scarce, the consumption of energy-dense foods was an important component of survival, especially during stressful periods of time when humans had to flee or fight in the face of potential danger. The stress hormone cortisol (with the primary function of raising blood glucose) would be released to facilitate those reactions,” she says. “Today the human body is still programmed to seek out energy-dense foods to elevate blood glucose when cortisol is released – even though the cortisol may be released due to emotional or mental stress, rather than physical stress.”

“In addition, foods high in sugar and fat often serve the purpose of reward – a pattern which may be set in childhood, for example, when parents reward a child’s good behaviour by giving him or her sweets. This pattern of reward and comfort by means of food may last well into adulthood.”

Enjoy a healthy and balanced diet, recommends Viljoen. “Give preference to low-GI options that are high in complex carbohydrates and low in refined and added sugars [see www.gifoundation.com for a GI index of South African foods]. However, keep in mind that depression can be a serious mental illness for which simple dietary changes may be of limited help. In such cases, one should seek the help of a healthcare professional,” concludes Viljoen.