Children as young as 6 are ending their lives. Be aware, and take care. 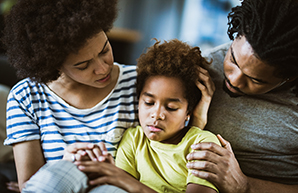 A child’s death is always hard to handle, and when it’s by their own hand, the pain, grief, guilt and regret can be difficult to bear. Fortunately it’s rare, but Cassey Chambers, operations director of SADAG, reports that over one 10-day period last year (in 2018) they had reports of children aged 6, 9 and 12 committing suicide. “Parents need to know about it – they can’t assume that children can’t be depressed,” she says.
Most children are aware of suicide from an early age. In a study by the Centre for Research and Intervention on Suicide and Euthanasia in Canada, while few 6-year-olds understood the word “suicide”, all knew what “killing yourself” meant. And by age 9, most children understood the word and had talked about it with friends, heard adults talk about it or seen it on TV.
A study at the Research Institute at Nationwide Children’s Hospital in the US found that 85% of the children under 12 who died were boys, mostly by hanging, strangulation or suffocation, followed by guns. Almost all deaths were at home, between the hours of noon and midnight. And relationship problems were involved in 60% of cases.
In South Africa, Chambers reports that in urban areas children frequently overdose on medication (such as parents’ or grandparents’ heart or other pills), while in rural areas they tend to overdose on chemicals.

Children turn to suicide for a range of reasons, from depression or other mental health problems, to alcohol or substance abuse in the home, sexual or other abuse, neglect and bullying (in life, and increasingly online). They don’t have the maturity, life skills and ability to problem-solve a difficult situation, and may resort to taking themselves out of it instead, says Zamo Mbele, a clinical psychologist and SADAG board member. “They may not always realise that death is permanent.”
Researchers at the Catholic University of America have suggested that suicidal children “do not so much crave the termination of their biological existence” as crave “control, empathy, acceptance, recognition, validation and the prompt interpersonal responsiveness of key people in their life”. They are desperate for things to get better, but can’t think of another way to resolve the problem or ease their distress.

It’s not always easy to tell if a child is suicidal. They seldom speak directly about having suicidal thoughts, as an adult might – they aren’t able to put them into words, or don’t believe they can speak to anyone, or the suicide may be impulsive, on the spur of the moment. “Instead of talking about suicide, they may say things like ‘I want to sleep and never wake up’, or ‘I want to close my eyes forever’,” says Chambers.
This makes it important to introduce the subject of suicide from a young age, when teaching moments arise (reading stories, watching TV). That way you can impress on your child that no matter how hard life can be, you or other loving caregivers are there for them and can help them get through it.
“Children may also have more physical symptoms of depression than adults, such as unexplained stomach problems (but no real reasons for these), having a sore or tired body all the time, not wanting to go to school, headaches or crying a lot for no reason,” says Chambers. “It’s important for parents, extended family members and teachers to learn about the symptoms of depression in children.”
Spend time with your child – get to know their friends and what’s happening in their lives. Speak to their teachers and find out how they are behaving in the classroom and on the playground, Chambers urges. That way you can pick up any changes in your child’s behaviour or mood, from sadness, irritability or anger, to tiredness and lack of energy, as well as changes in their eating and sleeping patterns, or withdrawal. These are all warning signs of depression and potentially of suicide, and you need to speak up at once.

“Ask your child what’s worrying them,” says Chambers. “Don’t be scared to ask if they’re thinking of hurting themselves. You won’t be giving them ideas – you’ll be giving them a chance to talk and share what they are feeling.”
Listen with empathy and without judging – never dismiss their fears, try to tease them out of them, or accuse them of attention-seeking. Let them know that you love them no matter what, and are there for them, and together you can solve things.
And get them professional help: ask your medical professional to refer you to a mental health professional, or call SADAG for guidance.

SADAG is addressing child suicide with a Suicide Shouldn’t be Secret programme, which they are taking to schools. For information on this for advice and support, call the toll-free suicide helpline, 0800 567 567 or SMS 31393, or go to www.sadag.org for lots information on depression and suicide prevention.