Conditions that may be causing your cough

We take a look at the ailments that affect your chest and respiratory system -- and how to take preventive action this winter. 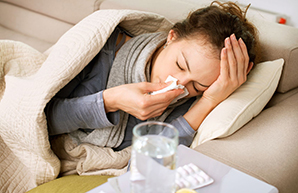 Having a respiratory ailment is a common complaint, especially during the winter months when most of us are confined indoors. This is because most common respiratory tract infections are transmitted by close human contact. Viruses are spread by direct contact with secretions – if someone sneezes or coughs on you, for example – or by touching contaminated objects such as door handles, coffee cups and telephones.

It's not surprising then to hear that crèche attendance is the worst risk factor for children getting respiratory ailments. Other risk factors for children and adults include smoking or being exposed to secondhand smoke and a compromised immune system. "Children from six months to two years old are more susceptible to infections because their immune systems aren't well developed," adds Johannesburg-based paediatrician Dr Karin Simmank.

We all know the symptoms – sore throat, runny or stuffy nose, facial pressure, coughing and sneezing, a headache and sometimes low-grade fever. These are characteristic of an infection in the upper respiratory tract, and you could be suffering from a common cold, pharyngitis, laryngitis, tonsillitis, sinusitis, ear infections, flu or H1N1 (swine flu).

Treatment: Most URTIs are initially viral and usually get better on their own. If necessary, you can relieve symptoms such as a headache, sore throat and muscle aches by taking a painkiller. Dr Ricky Behari, a specialist physician based in Port Elizabeth, says the body's response to a viral infection is to create inflammation.

"The best thing is to go to bed and drink lots of fluids," Dr Behari says. "Feeling tired when you're sick is your body's way of telling you to sleep – because that's when your blood pressure drops and your pulse rate slows down, which helps to keep the infection localised. Then the inflammatory response, which is part of the body's immune system, can fight the infection before it spreads."

Pretoria pulmonologist Dr Gernot Irsigler says some URTIs may need medications such as bronchodilators to open up the air passages. If the condition doesn't improve, there may be a bacterial complication and an antibiotic could be needed to clear it up.

Should your condition worsen, it will most likely develop into a lower respiratory tract infection. Complications of this part of the respiratory tract – which starts from the trachea (wind pipe) and ends in the alveoli of the lungs – are usually more advanced and require medical attention.

Bronchitis is usually a complication of a viral infection such as a cold or flu and occurs when a secondary infection by a bacterium takes over. Bronchitis causes an acute inflammation of the air passages in the lungs. The bronchial tubes swell and mucus is formed, making breathing difficult. Shortness of breath is therefore a symptom to look out for. You will also develop a cough, which usually lasts for four to six weeks. You may get a temperature and could experience some pain behind your breastbone.

Bronchitis isn't contagious and can be treated with over-the-counter cough medicines. Antibiotics can help if there's a bacterial infection, but aren't of any use if the cause is viral. Dr Simmank says there are blood tests that can show whether an infection is bacterial or viral. Anyone who suffers from any form of bronchitis should avoid smoking or being exposed to smoke, as this can irritate the condition.

This is the result when the air sacs in the lungs become infected. It's the most severe of the common respiratory tract infections. Bacteria, viruses, fungi or parasites can cause pneumonia. It's often a complication of another condition such as flu and can start simply with a cough and fever, so you may not realise you have a more serious illness. Other symptoms that could develop are shortness of breath, sweating, shaking, chills, headache, muscle pain and fatigue.

Dr Irsigler says, "If you have a sharp, stabbing pain in your chest, you should consult a doctor as soon as possible, because there's a likelihood that you have pneumonia." People with compromised immune systems – through HIV/AIDS or other diseases that affect the immune system – as well as smokers and people who have a lung or cardiovascular disease are vulnerable to contracting pneumonia.

Most people who pick up the illness can be treated at home and recover in about two to three weeks. But the elderly, babies and people with other diseases can become very sick and may need to be hospitalised. If not treated effectively, pneumonia can be a life-threatening illness.

The most common type of pneumonia is bronchopneumonia, which spreads into the bronchi. If the infection spreads into one or more compartments (lobes) of the lung, it's known as lobular pneumonia. About half of all pneumonia infections are caused by the streptococcus pneumoniae bacteria, which can be spread by breathing contaminated air or through contact with a person who is infected. Bacterial pneumonia can usually be treated with antibiotics.

Seasonal flu and swine flu have similar symptoms, which are more severe than cold symptoms and come on quickly. They include sore throat, fever, headache, muscle ache, congestion and coughing. However, swine flu is also associated with vomiting and diarrhoea. But while the H1N1 virus may initially present itself as an URTI, it is a serious condition and can become dangerous if it develops further into a LRTI. Seek advice from your doctor if you're concerned about any symptoms.

Pleurisy: This is an inflammation of the thin layers of tissue (pleura) covering the lungs and the chest cavity. It's characterised by a severe chest pain that starts suddenly. Anti-inflammatory drugs and antibiotics (if the infection is bacterial) usually clear up the condition.

Tuberculosis (TB): Caused by an infecting agent called mycobacterium tuberculosis, TB is spread through the air from one person to another via coughing. Sometimes no symptoms are evident. In other cases, they could include a persistent cough, fatigue, weight loss, loss of appetite, fever, coughing up blood and night sweats. Drugs can usually cure the disease, though multidrug-resistant TB is difficult to treat.

Chronic obstructive pulmonary disorder (COPD): COPD is a combination of emphysema and chronic bronchitis. Most cases are related to smoking, which triggers an abnormal inflammatory response in the lungs. This causes a narrowing of the airways, leading to shortness of breath. It is difficult to treat and usually has to be managed with drug therapy, often using an inhaler.

General hygiene and lifestyle can help to decrease the risk of picking up an infection. Here are some suggestions:

How Clicks Clinics can help you during the flu season