Drug addiction – or substance use disorder – is a chronic relapsing brain disease that is characterised by the compulsive seeking out and use of drugs, despite the harmful consequences to both physical and mental wellbeing.

The causes of drug addiction are varied, but environmental factors and exposure to addictive substances (in the home or through peer group pressure) may encourage initial drug use. However, repeated use of a drug leads to changes in the structure and function of the brain, leading to dependency.

Drugs are chemicals that interfere with the way the brain functions by imitating the brain’s natural chemical messengers (neurotransmitters) and/or overstimulating the reward circuit of the brain.

For example, when a person takes heroin, the morphine molecule binds to the endorphin receptor site on the neurons and mimics the function of natural endorphins. After the initial rush of endorphins floods the body, a state of euphoria sets in as the morphine is absorbed into the bloodstream. After a period of repeated use, dependency sets in, and continued use is to relieve the painful withdrawal symptoms felt as the endorphins leave the body, rather than to experience the rush or ‘high’.

Drug-use statistics as reported by the United Nations World Drug Report (2014) indicate that drug abuse is a growing concern in South Africa, with 7.06% of the population abusing narcotics (that’s one in 14 people or 3.73 million people in 2013). Further statistics based on the percentage of people treated for that year show primary drug use as follows:

The symptoms and behaviours associated with drug addiction include the following:

Different drugs have different short-term effects on the body. Some may stimulate the system (cocaine), while others have a relaxing effect (benzodiazepines, such as Valium).

Long-term symptoms of repeated drug use include a decrease in mental acuity (possibly brain damage), neglect of hygiene and appearance, neglect of friends and social interactions, organ damage, and an inability to meet responsibilities. In addition, drug usage increases the risk of becoming infected with hepatitis C and HIV.

The signs of overdose include:

Drug overdose is a medical emergency that may lead to coma or death – immediate treatment should be sought.

A diagnosis of drug addiction is usually done in conjunction with a psychiatrist, psychologist or licensed drug counsellor. Normally the following criteria are followed (as laid out in the Diagnostic and Statistical Manual of Mental Disorders, the standard classification of mental disorders used by mental health professionals).

A substance use disorder is present if the following have occurred over a 12-month period:

Treatment options can be discussed with your healthcare provider, and may take the form of an in-patient treatment programme in a facility that caters for drug addiction, or on an out-patient basis.

Recovery is possible, but it requires lifetime management and support.

Prevention of drug addiction begins with understanding the risk factors; and avoiding drug use all together. Risk factors include:

Worried your child is taking drugs? Make use of the convenience of online shopping to purchase the Clicks 5-Drug Multi Test, which offers a combination of five different drug tests: for cocaine, tik, ecstacy, heroin and dagga. 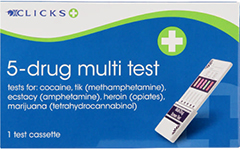 The accuracy of this information was checked and approved by physician Dr Thomas Blake in June 2017
Read More: Depression Super Section