Hay fever – or allergic rhinitis, as it is also known – is characterised by inflammation of the nasal airways, which occurs when an allergen – something to which the sufferer’s immune system is especially sensitised – is inhaled and causes a type of allergic reaction.

The immune system in sufferers mistakes a harmless substance as something dangerous, prompting the body to create antibodies against it. These antibodies cause the release of inflammatory mediators, chemicals like histamine, which cause the reaction and associated symptoms.

While not symptoms of hay fever, it’s worth noting that those who are prone to hay fever are also more likely to suffer from other allergic conditions such as asthma and eczema.

Hay fever can usually be diagnosed based on the signs and symptoms and a medical history. The patient will be asked questions by their doctor about when the symptoms are worse or what triggers them in order to determine specific allergens.

A physical examination may also be conducted to rule out any other causative condition being behind the symptoms. Additional tests that may be conducted include blood testing to measure the amount of immunoglobulin E (IgE), the allergy-causing antibody in the bloodstream, or a skin prick test, which exposes the sufferer to tiny amounts of common allergen to observe which ones they react to.

A vast array of hay fever treatment options can reduce the symptoms, or even prevent them in some cases. There’s a wide variety of over-the-counter medication available for the treatment of hay fever, with antihistamines being one of the mainstays. These drugs work by blocking histamine, the chemical responsible for the symptoms of hay fever.

Prescription corticosteroids (usually prescribed in a nasal spray for hay fever sufferers) treat the inflammation associated with the condition, but it can take up to a week of use for sufferers to notice the benefits.

Immunotherapy is the only causative treatment for allergies, and this focuses on desensitising the immune system, usually with a series of allergy shots.

It may not be possible to avoid developing allergies in the first place, but hay fever prevention is possible if you are able to avoid the allergens that trigger it. This may involve remaining indoors when the pollen count is high, keeping home and car windows shut to keep allergens out and regularly vacuuming to keep your home dust- and dander-free (particularly if you have pets).

It’s also important to use allergy medication as directed by your doctor or Clicks Pharmacist, as this may be able to help prevent symptoms from flaring up when exposed to an allergen. 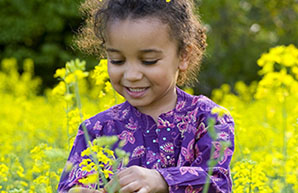 How to manage your child's allergies in spring

Here is great advice from Clicks' resident paediatrician to ensure your kids enjoy this season outdoors.