A panic attack is a sudden episode of intense, overwhelming anxiety that produces severe physical symptoms.

Panic attacks occur frequently and unexpectedly and are often not related to any external threat. A panic attack (also called an anxiety attack) can last from a few minutes to half an hour. But the physical and emotional effects of the attack may last for a few hours.

These attacks occur when the brain’s normal mechanism for reacting to a threat (the so-called “fight or flight” response) becomes inappropriately aroused.

A person who experiences recurring panic attacks is said to have panic disorder, which is a type of anxiety disorder. They generally have recurring and unexpected panic attacks and persistent fears of repeated attacks.

Between two and four percent of the population will suffer from panic disorder at some point in their lives, according to the South African Depression & Anxiety Group (SADAG).

Panic is twice as common in women as it is in men. For women, the average age of onset is during their early 20s, while for men it is in their 40s.

It's not known what causes panic attacks or panic disorder, but these factors may play a role:

Panic attacks may start off by coming on suddenly and without warning, but over time, they're usually triggered by certain situations.

An attack can make you feel like you’re about to die but it's usually harmless once the symptoms pass.

See your doctor if:

Diagnosis of panic disorder can be difficult. Several other physical and mental disorders are related to panic attacks. Depression, generalised anxiety disorder, social phobia, substance abuse, and personality disorders often occur with panic disorder. You may be evaluated for these and other disorders.

Consult your doctor who will give you a thorough physical and mental evaluation and ask you about your symptoms. This is based on the American Psychiatric Association’s Diagnostic and Statistical Manual of Mental Disorders (DSM-V). In the DSM-V, panic disorder is defined as repeating, unexpected panic attacks. It is followed by at least one month of concern about having a panic attack, worry about the consequences of panic attacks, and a change in behaviour as a result of the attacks.

Your doctor will also look for and rule out medical disorders that could cause your symptoms including:

Your doctor should also ask about your intake of medication, food, herbs and supplements.

The main aim in treating panic disorder is to reduce the number of panic attacks and ease the severity of symptoms.

Antidepressant medications and tranquilisers are usually used to treat panic, as they “repair” the underlying chemical imbalance.

Before starting any form of treatment, your GP will discuss all of the options with you, outlining the advantages of each type and making you aware of any possible risks or side effects.

No single treatment works for everyone and you may need to try a number of treatments before finding one that works for you.

During an attack, you can create relief by doing the following:

While panic disorder cannot be prevented, you may be able to prevent or reduce the number of additional panic attacks with proper treatment, including the following: 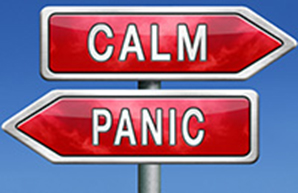 What to do if you experience a panic attack

Research suggests that panic attacks are on the rise. We find out what they are and how to stop them.