How to help a depressed teenager

Teenage depression is a common concern. We provide expert advice to help you deal with a troubled teen. 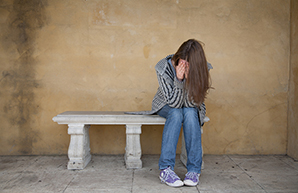 The teenage years are plagued by insecurities, angst and hormonal changes, but sometimes problems run deeper than the "norm" and require special attention.

“Parents often feel helpless when they become aware of the changes in their teenager, and might not know how to help them,” says Leatia Stemmet, a counselling psychologist. “This could become exacerbated by the natural state of being in adolescence, where teenagers naturally move away from their parents on an emotional level. Thus, it is often challenging to maintain a necessary level of closeness, whilst allowing their teen the space to develop their own individuality.”

Stemmet says it is imperative to communicate your worries with your teen, though this should be done from a point of concern, not judgment. “For example, if you are concerned about friends being a bad influence, rather open the communication channels in such a way that your teenager feels they can come to you with their discomfort with, for example, peer pressure, instead of feeling like you will respond with an ‘I told you so’ attitude,” she explains. “Yes, you might have warned them, but if they are going to feel judged by you, they might refrain from expressing their concerns, which could have dire consequences.”

Warning signs that your teenager may be depressed

Steps to helping a depressed teenager

Meaningful communication is key: “Contrary to what you might think, most teenagers crave a relationship with their parents, though it is of paramount importance to connect on their level, not yours,” says Stemmet. “Thus, if your daughter wants to tell you about the cute boy in class, listen, because soon she might need to talk to you about feeling pressured to have sex with him. One of the most important factors is to listen, really listen. Try to find ways to connect with your teen, even when they seem disinterested. Give them space to develop their own opinions and interests, and engage with them about these. They are dealing with one of the most important phases of life, and might need some guidance from you, not judgment.”

Know when to seek professional help: If "the blues" don’t seem to be disappearing, make an appointment with your physician. A physical examination will be conducted to rule out any physical reasons for depression. Be ready to answer personal questions pertaining to lifestyle, family medical history and your child’s medical history. Your doctor can then refer you to a psychologist or psychiatrist who specialises in treating adolescent depression.