Chickenpox is a contagious illness characterised by a red, itchy, blistering rash that can cover the entire body.

It is caused by the varicella-zoster virus. As it is an airborne disease, chickenpox transmission occurs easily through coughing or sneezing by infected individuals who will remain contagious from 48 hours before the appearance of the rash until after the rash has scabbed over and dried out completely.

Symptoms usually come on after an incubation period of 10 to 21 days after the initial infection, and the disease is most common in childhood.

In addition to the tell-tale rash, which can last around two weeks, chickenpox symptoms include:

The chickenpox rash will progress through three stages in the course of the infection:

A doctor will usually come to a chickenpox diagnosis after examining the rash and taking note of any accompanying symptoms. A blood test or test of the fluid in the blisters can confirm the diagnosis, but this is usually not necessary. It’s important to get a diagnosis from a healthcare professional in order to rule out any other more serious conditions, like meningitis.

Chickenpox treatment is largely symptomatic as the virus runs its course. Usually, while uncomfortable, the disease is relatively mild and resolves in five to 10 days. Over-the-counter painkillers can help reduce fever and pain, while an antihistamine may help with the itching.

The antiviral drug, acyclovir, can reduce the duration of the symptoms and may be prescribed in high-risk cases, such as in pregnant women or people with compromised immune systems where complications can include bacterial infection, pneumonia, toxic shock syndrome and encephalitis. Because chickenpox is usually worse in adults, it’s also advisable to start a cycle of acyclovir within 24 hours of the rash first developing.

It is essential for infected individuals to remain home from school or work until the blisters have scabbed over completely in order to avoid passing the virus to schoolmates or colleagues.

There is a chickenpox vaccine called the varicella vaccine that can help you prevent contracting the virus. It can be safely administered to babies older than nine months of age, adolescents and adults and is recommended for those who have not had the disease.

What to do now
Baby immunisations are available at Clicks clinics, including for chickenpox. Stay on track with your little one's immunisations with the Clicks childhood vaccination schedule. 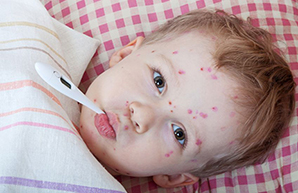 When chickenpox gets complicated

Sometimes chickenpox can be dangerous. Learn about its possible complications.