German measles, or rubella is a highly contagious illness caused by the rubella virus and although it is similar to measles (rubeola), it is not as infectious or potentially as harmful as measles.

German measles is also known as rubella or three-day measles, and is a viral infection affecting the skin and lymph nodes. It takes 14 to 23 days for the symptoms of German measles to appear.

People get German measles through contact with an infected person or from the air. The most contagious period is a week before the rash manifests, until one to two weeks after the rash disappears.

German measles is only dangerous if it is contracted during pregnancy because the mother will pass it on to her unborn baby. Rubella can cause a miscarriage or stillbirth, or birth defects. These include intellectual impairment, deafness, stunted growth, and problems with the eyes, heart, bone marrow, spleen or liver.

German measles symptoms are not always obvious, particularly in children, and if they do appear, they occur between two and three weeks after exposure to the virus and are evident only for around two to three days.

For adults, symptoms are more obvious and may include:

If a doctor suspects that a child or adult has German measles, he may take a nasal or throat swab and send it to be tested for the virus, or he may take a blood sample to check whether the patient has immunity (antibodies) against the virus.

There is no treatment for rubella. You can take medication like paracetamol to reduce fever, while ibuprofen will reduce inflammation. There are also combinations of paracetamol and ibuprofen that will do both.

The rash, if it is itchy, can be treated with a soothing lotion, such as calamine lotion.

The German measles vaccine is called the MMR (measles-mumps-rubella) vaccine and is usually given to babies between the ages of 12 and 15 months.

A booster vaccine is also given to children between the ages of 4 and 6.

What to do now

Baby immunisations are available at Clicks clinics, including the MMR (mumps, measles and rubella) vaccine. To make an appointment at a Clicks Clinic, call 0860 254 257 or book online for Clicks Clinics. 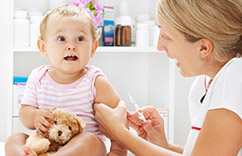 When it comes to a subject as crucial as immunisation, it’s vital that you know the facts.