The medical world is continuously working on ways to improve treatment for and prevention of stress. Make sure you visit this page regularly for a list of the latest studies discussing scientists’ insights and advancements.

1. The link between stress and Alzheimer’s disease

University of Florida Health researchers recently revealed further evidence that there may be a link between stress and the development of Alzheimer’s disease. They found that one of the hormones released by the brain in times of stress increases production of amyloid beta, a protein that triggers the brain degeneration that can lead to Alzheimer’s disease.

2. Fever may be a symptom of stress

That mystery fever you can’t seem to shrug? That may be stress-related too. In an article published in the journal Temperature, Dr Takakazu Oka of the Kyushu University Graduate School of Medical Sciences in Japan explains that psychogenic fever is a psychosomatic condition related to emotional events or chronic stress that manifests as a raised body temperature. He explains that many doctors don’t yet fully understand how stress affects body temperature, meaning that often this type of fever is misdiagnosed as something else.

It’s also becoming clearer to the medical community that it’s never too early for stress to start playing havoc on your health. A body of research has shown that stress experienced by expectant mothers during pregnancy can influence the later childhood development of the unborn baby.

One of the most recent studies by researchers at the University of Notre Dame Australia and the Telethon Kids Institute indicates that there is a relationship between maternal stress and the development of coordination and motor skills in childhood, with those children born to mothers who had faced more stressful events during pregnancy scoring lower on tests of these functions, and stressful events later in pregnancy seeming to have more of an impact than those experienced earlier.

4. Stress in childhood associated with greater risk of heart disease and diabetes in adulthood

In one 45-year study, the results of which were recently published in the Journal of the American College of Cardiology, British researchers found that psychological distress even in childhood is associated with a higher cardiometabolic risk score in adulthood, indicating a greater risk of heart disease and diabetes. The study authors explained, “While effects of distress in early childhood on higher cardiometabolic risk in adulthood appeared to be somewhat mitigated if distress levels were lower by adulthood, they were not eradicated.”

The onus is on parents to create a safe and secure environment for their children, as well as to teach them effective stress relief and management strategies from an early age. 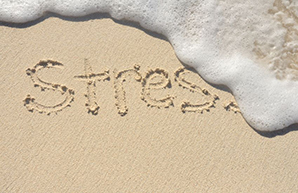 Stressing about your stress levels is a self-fulfilling prophecy. Here’s why you need to tone it down.